Blue Mountains is a beautiful place located west of Sydney in New South Wales. It is just a train ride away from Central Station in Sydney. It takes 2 hours from central to katoomba and you can easily walk up to the Three Sisters. There’s an incredible viewpoint. It is a rock formation in the blue mountains and is known to be an Australian (Aboriginal) legend. Apparently three sisters from a tribe fell in love with three brothers of a different tribe. There was a battle because marriage was forbidden amongst the two tribes and so the three sisters were turned into stone by an elder for protection.

Followed by Three Sisters we went on a hike just beside the viewpoint. It led us to these beautiful waterfalls. Along the way, we witnessed these gorgeous birds including cockatoo birds. They look so pretty especially because they’re easily distinguishable.

The waterfalls were a mission and a half to get to. We went through a rainforest and there were a bunch of danger signs along the way. However we managed to slide through the hill and get there somehow. 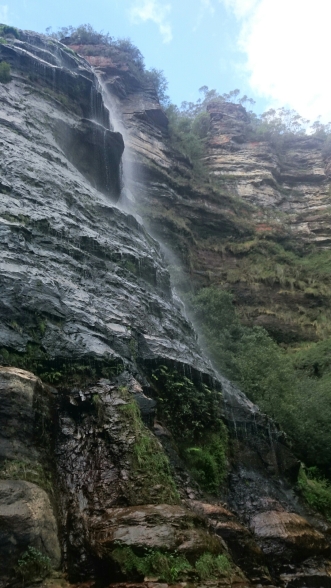 2 thoughts on “The Blue Mountains ”